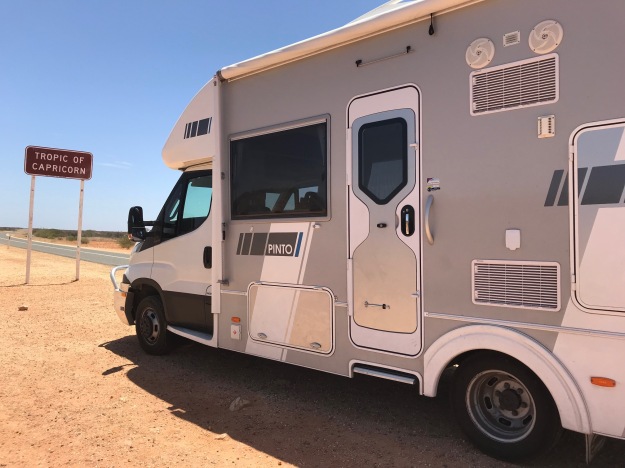 The past week’s headlines have all been about the dreadful flooding over in North Queensland. The road signs here in Western Australia provide a grim reminder that the same could easily happen here. Cyclones are most prevalent in February and March so we’ve downloaded the Bureau of Meteorology (BOM for short) App and picked up various cyclone advice leaflets now that we have officially crossed over into the Tropic of Capricorn.

We are enjoying the hot weather. It means the duvet has been packed away, air conditioning is on and we’re making good use of our barbeque, fly swot and even Jura’s outside shower. We stopped in the town of Carnarvon for a few nights. Sadly it’s a little bit run down since the Tracking Station which supported many of NASA’s space programmes is no longer in use. The Space and Technology Museum however was well worth the entrance fee and we spent a couple of hours looking at the various interactive displays, dressing up as astronauts and watching the first ever live TV broadcast between Australia and the UK conducted by Raymond Baxter whilst sitting in a mock up 1960s front room! 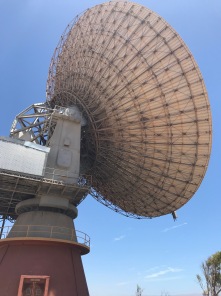 Are You Receiving Me?

Loud and Clear, Over!

We camped overnight at Quobba, loved the blow holes and did some snorkelling before heading on to Coral Bay. There isn’t a lot to Coral Bay but it is very pretty and the marine life is wonderful. We saw over fifty sharks cruising the shallow water at Skeleton Bay (what a name huh!) and I’ve enjoyed swimming and snorkelling in Bill’s Bay.

Coral Bay from another angle 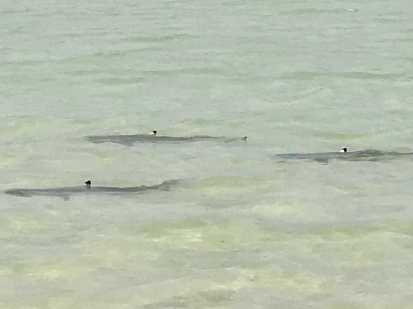 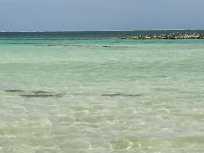 Coral Bay is where we are celebrating our 16th Wedding Anniversary. Coral is actually meant to come after 35 years marriage but I’m not sure if we’ll be fit enough to come back here then! Topaz is the traditional anniversary gift for 16 years and Paradise Beach here delivers on blue topaz for the colour of the sea and amber topaz for the sand. 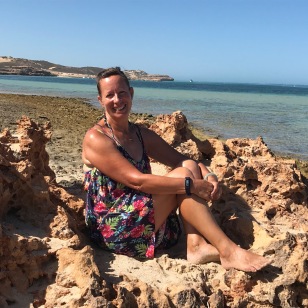 For those that don’t know, Mike and I take it in turns to organise a special day which includes an activity, a meal and a present (or two). Last year, for example, it was crystal and we went up to London to see the Crown Jewels, I got some bath crystals and engraved crystal glasses (neither suitable in Jura!) and we had dinner at a Michelin star gastro pub in Henley. Past activities have included climbing the Eiffel Tower for our 6th Anniversary (iron) and visiting Australia to collect Sheila the Sheep’s fleece from our very good farmer friends for our 7th Anniversary (wool).

I really wanted the activity this year to be fossicking but that will need to wait until we get round to Queensland. Instead we ended up as the only two people signed up for the Turtle Trek Adventure, a two hour trip on quad bikes up to Five Fingers Reef. It was quite an adrenaline experience coming down some of the sand dunes and the best of it was we actually got to see turtles swimming on the reef below us. Just love nature’s camouflage.

Mike on his Quad Bike!

There are only two main eating establishments in Coral Bay – Bill’s place or Fin’s Café. Both had seagulls hopping on the tables although the ones at Bill’s place had the decency not to shit on the carpets or furniture when we were around! We had our anniversary meal at Bill’s and my gin cocktail matched perfectly with the topaz theme although we were disappointed that the promised tablecloth did not materialise!!! 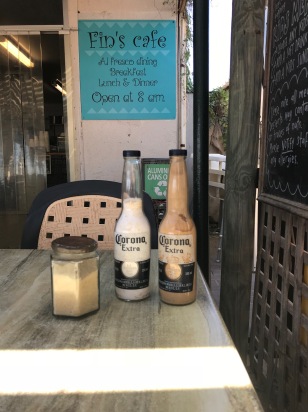 Salt and Pepper Anyone?

Trying to do anything in secret whilst living in such close proximity to each other is well nigh impossible. Thankfully I got myself organised before leaving the UK and using blue and amber topaz beads sewed together a map of Australia. All that’s missing is a piece of driftwood to hang it on and Mike to tell me his 16 favourite places so I can mark these on the map with small topaz crystals. I’d lay money on Kiama, Timboon, Robe and Esperance featuring among the 16 but definitely not Millicent or Bunbury!!! We still have four months to go!